Hi, as a Trustee of the Birmingham and Black Country Wildlife Trust, I am naturally really keen that one its projects should secure funding to further improve a long neglected part of Birmingham and Sandwell’s natural areas.

Deer’s Leap is a wonderful opportunity to enhance nature right in the middle of the West Midlands conurbation.

Deer’s leap has been put forward to receive support from the Tesco Bag Tax fund. So I really hope that as many people will vote for Deer’s Leap. Please do so at your local store – see the map. You can vote in 14 stores in central Birmingham from 27 February until 6 March on who should receive the £12,000, £10,000 and £8,000 awards, so The Wildlife Trust are urging customers to vote to support their work to open up this urban wildlife oasis for everyone to enjoy. 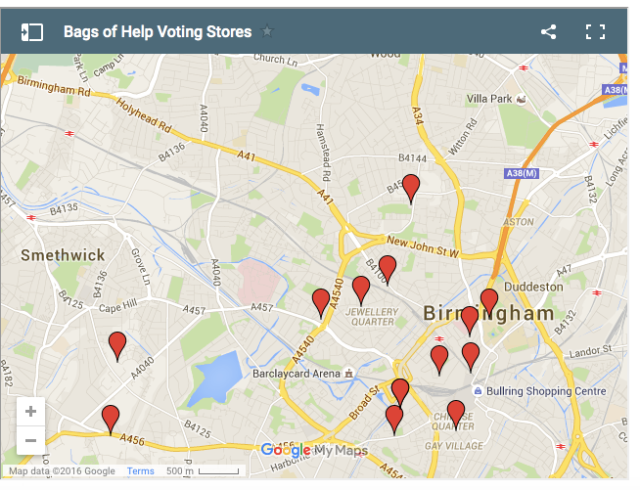 If successful with securing the funding, then further improvements will be made to Some of the steps within the site, which are rotting and dangerous, while there is no obvious path through the site for people to get round safely. Being able to allow visitors of all ages would make a huge difference to the quality of life and health of local people.

Ownership of Deer’s Leap Wood, which sits on the border between Birmingham and Sandwell, passed to The Wildlife Trust for Birmingham and the Black Country in 2014 and since then a huge amount of work has been done to remove unsafe trees, de-silt and clear the Boundary Brook of fly-tipped litter and repair some of the paths. This historic site was once part of the M&B brewery, which is still evident from the hops found growing on the site, and before that was part of the large Rotton Park estate.

You can also find out more information about Tesco’s Bags for Help whch has teamed up with Groundwork to launch its initiative across England and Wales. The scheme will see three community groups and projects awarded grants of £12,000, £10,000 and £8,000 – all raised from the 5p bag charge.

Like Loading...
This entry was posted in Biodiversity, Nature, Tesco Bags for Help, Uncategorized, Wildlife. Bookmark the permalink.